The Nursing Now Campaign, of which the EFN was the European regional lead, just launched its final report “Agents of change: the story of the Nursing Now campaign”, which shows nurses and their allies, united in the world, are increasing their influence and building a platform to improve healthcare for the future. 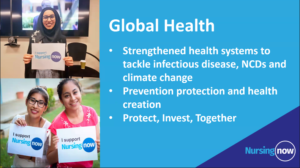 Officially launched in February 2018, Nursing Now aimed at improving health by raising the status and profile of nursing globally and maximise the contribution that nursing makes to Universal Health Coverage, women’s empowerment and economic development. The campaign is present in 126 countries with more than 800 independent Nursing Now groups and more than 31,000 young nurses participated in the Nightingale Challenge, and 24 countries invested more in nursing in response to the campaign. Social media and digital development have also contributed to “bind” all these healthcare professionals around the world, offering them a real platform to share and spread their messages, with one key message: “nurses are vital agents of change that can improve health and transform health care”. To improve citizens’ health and offer a quality healthcare system, it is necessary to invest in nursing education by offering all nurses to work to their full potential.

The COVID-19 pandemic shed the light on nurses and highlighted the importance of their profession for saving human lives. Nurses have always been at the forefront to ensure patients the necessary health care, mental care and physical well-being, adopting innovative solutions to face the new challenges that have emerged due to COVID-19, as true agents of change! But the pandemic has also revealed how nurses are often underestimated and taken for granted. And one of the lessons learned from the pandemic, is the need to act quickly and in the best possible way. Investing in the training of nurses, empowering them to work in safe environments, recognizing their importance, supporting them and giving them greater leadership are all necessary actions that must be implemented as quickly as possible to ensure the creation of a strong and resilient healthcare system. 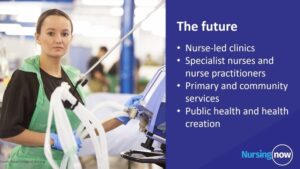 Finally, the report shows that the most remarkable achievements have been at national level, where Nursing Now groups have influenced policy and investment. Sixty-three groups reported increased investment in nursing during the campaign, with some evidence that in 24 countries investment was directly influenced by local Nursing Now groups. There has also been an increase in nurses in leadership positions, as Chief Nursing Officers and on boards, who are able to exercise greater influence in shaping policy and service delivery.